The Importance of LED Color Consistency

The CCT temperature refers to the blackbody radiation. This is the light emitted by a solid object heated by the lamp. CCT is expressed in degrees Kelvin, which is the standard temperature measurement. The light emitted by a black body as it warms passes through a specific color line that follows a curve within a scene. Starting from red, the light changes to orange, yellow, white and blue.

For example, the color of the light emitted by a filament lamp, approximately 2700K. This value is at the end of the red or hot scale. The visible light spectral analysis makes it possible to define color temperatures for non-glowing white light sources, such as LED lighting and fluorescent lamps. Although the LED gives the same light color as a heated 2700 K wire, it has a real temperature of approx. 80 degrees.

There are several standards that define the chromaticity of different light sources. For example, for LED sources, 8 nominal CCTs range from 6500 K (white daylight) to 2700 K (warm white light). Of these CCTs, six correspond to the chromatic specifications of compact fluorescent lamps to ensure some consistency between the different types of light sources. In addition, two additional CCTs are defined to cover holes that are not due to the CFL chromaticity standard along the curve, as the LEDs can produce any variation in color temperature within the range. 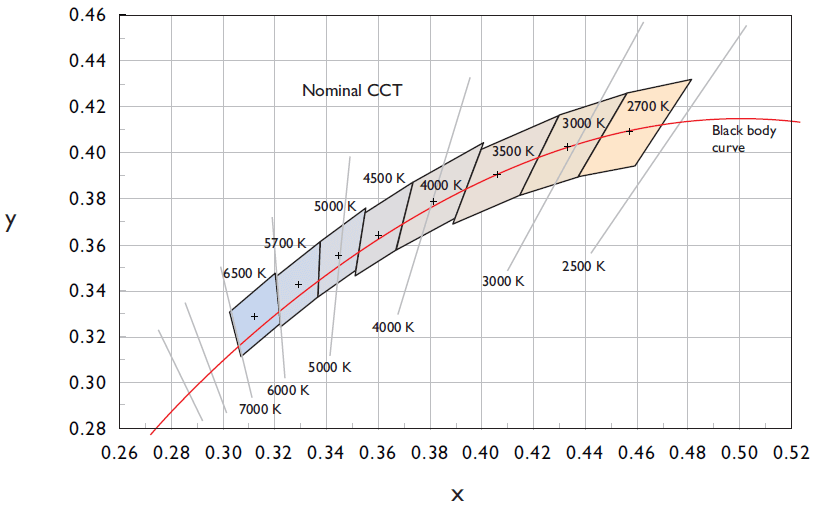 The tolerance or range of variation corresponds to each curved and curved CCT. Changes in curiosity cause blurredness of the light source or red, and these variations make the curve of the upper and lower black body pink or green. These changes are measured along the curve of the black body at Calvin, and the curve of the vertical fluctuations is called Douv. The CCT types allowed at each color temperature in the color scale are defined by square, vertical and curved lengths. The duv and CCT intervals indicate each type of four pages for each color temperature.

Within each color space with color temperature, permissible variations of the CCT define a square perpendicular to the curve. The duv and CCT scales for the temperature of each color determine the size of each square. 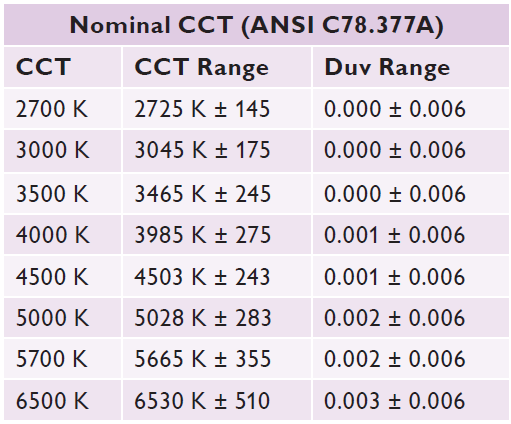 For example, the nominal CCT of the 3000 K square has a tolerance difference of plus or minus 175 K with a center of 3045 K. The 3000 K square covers the black body curve from 2870 K to 3220 K. In practice, the measured value of Duv and CCT of LEDs can vary significantly, values are still considered to have a nominal 3000K CCT. 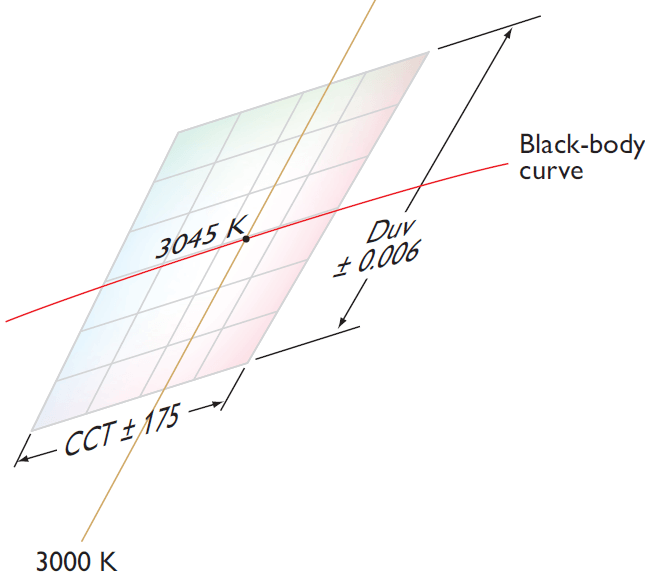 LEDs vary in lumen, CCT and voltage during the production process. Because these differences may be significant, LEDs are marketed on discs. This connector process allows the selection of LEDs that meet the specified specifications. For example, binning lets you select LEDs that meet the US standard when it comes to the specific color required.
Lighthouse manufacturers are developing different methods for selecting LEDs in a way that minimizes color differences, which can be seen from production to production or from the luminaire to the luminaire.

Some LED manufacturers have 16 boxes for a nominal value of 2700 K. However, there will always be a specific variation of Duv fluctuation and K-degree from bucket to bucket. To ensure the consistency of the colors, some manufacturers of LED luminaires want to exceed the standard by introducing standards for LED packaging. For example, Elstar has developed a mathematical classification model called Ledybin. This mathematical model guarantees the uniformity of color in all production lines for all LED StripS.
Instead of following the lack of 7 steps of the ANSI standard, the LED lighthouses and CCAd Ledybins from MacAdam are elliptical in 4 steps. Ledybin will use the discs' LEDs as close to the basket as possible to avoid color changes. 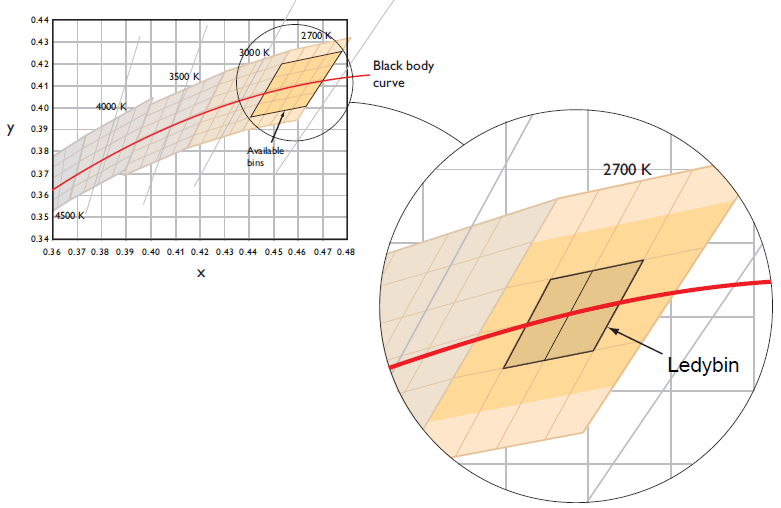 Proprietary ledybin algorithms are used to ensure color consistency of LED strips from batch to batch and from roll to roll. It is especially important to ensure reliable color consistency over time for expansion and multi-site installations, for phase installations where fixtures are purchased and installed at different times, and in the case of fixture flaws for color matching replacement fixtures. Fixtures.

What CCT can we offer? 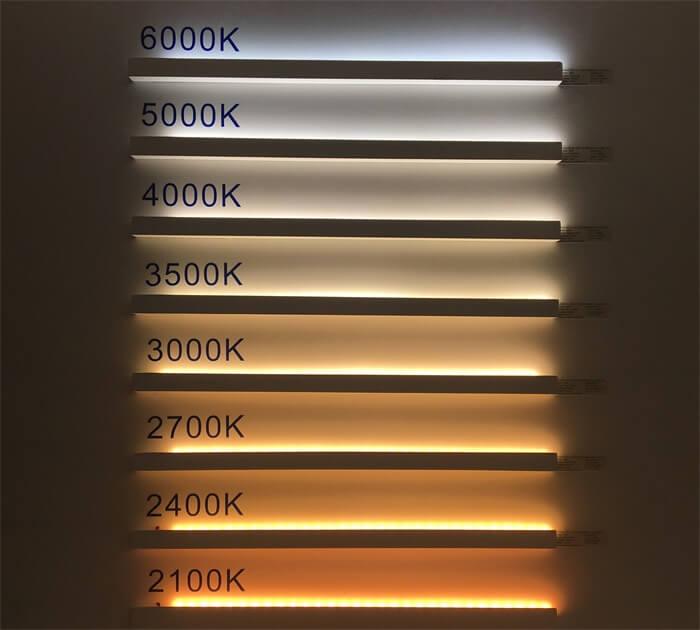